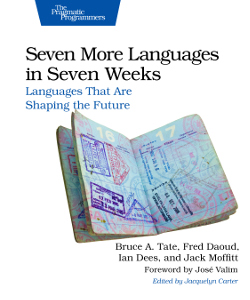 I read the previous book of this series (Seven Languages in Seven Weeks) about a year ago so now I finished reading Seven More Languages in Seven Weeks: Languages That Are Shaping the Future by Bruce Tate, Fred Daoud, Jack Moffitt, Ian Dees and I wasn’t disappointed. This books contains good description and explanation of core concepts of seven languages: Lua, Factor, Elixir, Elm, Julia, MiniKanren and Idris. Actually MiniKanren isn’t a general-purpose language, it’s a DSL, in this book used core.logic for Clojure.

For me most interesting was reading (and doing exercises) about Elm, MiniKanren, Factor and Idris. And I think I’ll try to use some ideas and patterns from this languages in my projects. Also in this book I’ve seen a cool concept of tables and meta tables in Lua, and I’ll probably try to write something in this language, maybe some little game with LÖVE.