How The Fuck works 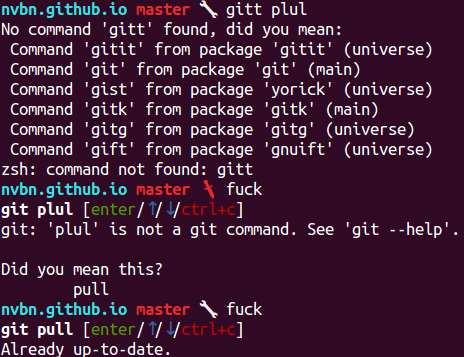 Not so long ago I introduced an useful app The Fuck that fixes the previous console command. It was downloaded thousands times, got tons of stars on github, had tens of great contributors. And it’s interesting inside.

Also about a week ago I discussed about The Architecture of Open Source Applications books. And now I think it’ll be cool to write something like a chapter in the book, but about The Fuck.

The simplest abstraction for describing the app is a pipeline, from the user side it looks like just:

It’s that simple because fuck (or whatever user uses) is an alias, it does some magic for getting the broken command, executing fixed command and updating the history. For example for zsh it looks like:

Back to pipeline, for thefuck that runs inside the alias it’ll be:

And all interesting stuff happens inside of thefuck:

Most significant part here is matching rules, rule is a special modules with two functions:

I guess the app is cool only because of the rules. And it’s very simple to write your own and now 75 rules available, written mostly by third party contributors.

Command is a special data structure that works almost like namedtuple Command(script: str, stdout: str, stderr: str) where script is a shell-agnostic version of broken command.

All shells have different ways to describe aliases, different syntax (like and instead of && in fish) and different ways to work with history. And even it depends on shell configs (.bashrc, .zshrc, etc). For avoiding all this stuff a special shells module converts shell specific command to sh compatible version, expands aliases and environment variables.

So for obtaining mentioned in the previous section Command instance we using special shells.from_shell function, run result in sh, and obtain stdout and stderr:

And also we making some similar step with fixed command – convert shell agnostic command to shell specific with shells.to_shell.

Originally settings object was passed to every place where it was needed as an argument, it was cool and testable, but too much boilerplate. Now it’s a singleton and works like django.conf.settings (thefuck.conf.settings).

UI part of The Fuck is very simple, it allows to chose from variants of corrected commands with arrows, approve selection with Enter or dismiss it with Ctrl+C.

Downfall here is that there’s no function in Python standard library for reading key on non-windows and without curses. And we can’t use curses here because of alias specifics. But it’s easy to write clone of windows-specific msvrt.getch:

Also UI requires properly sorted list of corrected commands, so all rules should be matched before and it can took a long time. But with simple heuristic it works well, first of all we match rules in order of it’s priority. So the first corrected command returned by the first matched rule is definitely the command with max priority. And app matches other rules only when user presses arrow keys for selecting another. So for most use cases it work’s fast.

If we look to the app in wide, it’s very simple:

Where controller is an entry point, that used when user use thefuck broken-command. It initialises settings, prepares command from/to shell with shells, gets corrected commands from corrector and selects one with UI.

About UI, settings and rules you can read above.

Tests is one of the most important parts of any software project, without them it’ll fall apart on every change. For unit tests here’s used pytest. Because of rules there’s a lot of tests for matching and checking corrected command, so parametrized tests is very useful, typical test looks like:

Also The Fuck works with various amount of shells and every shell requires specific aliases. And for testing that all works we need functional tests, there’s used my pytest-docker-pexpect, that run’s special scenarios with every supported shell inside docker containers.

The most problematic part of The Fuck is installation of it by users. The app distributed with pip and we had a few problems:

Most of this problems was fixed by using special install script, it uses pip inside, but prepares system before installation and configures an alias after.