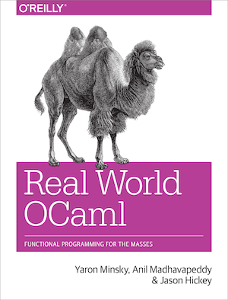 Around a month ago I’ve started playing around Reason and for understanding it better I decided to read something about OCaml and chose Real World OCaml by Anil Madhavapeddy, Jason Hickey, and Yaron Minsky. The book explains OCaml syntax, core library, different aspects of language and how to write FP and OOP code in OCaml. The book has a lot of examples and easy to read, not that much repetitive as a lot of books about programming languages.

Although before reading the book I thought that OCaml isn’t that much over-bloated and is a better language, especially it’s syntax. It helped me to better understand concepts and ideas behind Reason.